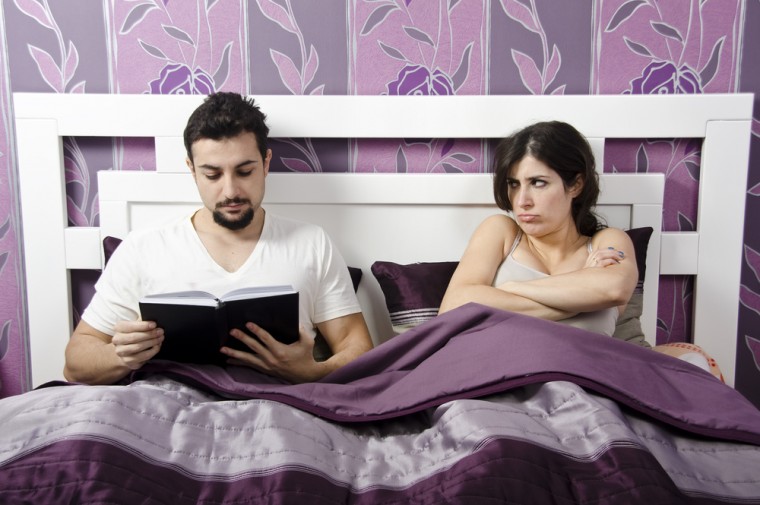 People are always changing, flowing through shifting emotional states. As we morph throughout time, one of the things that fluctuates is our desire for emotional–and physical–closeness. This phenomenon can really complicate relationships! Your partner might not want to cuddle or have sex or share a meaningful conversation at the exact moment you do, or vice versa. You might want to feel closer to someone who doesn’t want closeness, or want more distance from someone who seeks greater closeness from you. An important question then arises: What’s the best way to manage these ever-shifting desires for closeness and distance? Here’s what I tell clients.

Imagine a circle divided by a middle line into two halves. Now let’s call this circle the space within which a relationship occurs. We stand in one half while our partner stands in the other. Great, we have our space and they have theirs. Within our space, we can roam wherever we please, because this is our right. And the same is true for them, they have a right to place themselves wherever they want within their half.

In extraordinary relationships, both people understand and respect the middle line that divides the circle. If you want intimacy with your partner, if you want to be close to them, then travel to the middle line and wait for them there. If they want the same, at that moment, then you will find them there waiting for you. If you go to the middle and find that they are not there waiting for you, then okay. In time they will either come to join you, or not. That’s up to them. You get to go wherever you want within your half and, ideally, you respect that they get to go wherever they want within theirs; you give permission. In practical terms, standing at the middle might include you communicating, in a calm and mature way, your desire to connect with your partner. Hey, I’d love it if we just went out on the porch with a bottle of wine and relaxed together for a while. How does that sound to you?

If your partner declines your invitation–I’d rather finish up some stuff for work tonight–then continuing to stand in the middle entails supporting this decision of theirs without complaint or criticism. Sure thing! Maybe tomorrow then. What you do not want to do, no matter how fiercely you may crave intimacy, is to cross the line to go get your partner (starting an argument, getting upset, objecting).

Crossing the line shows that you have stopped giving permission for another to be who and how they are in the moment. It shows that, rather than giving permission, you want to force someone to be somehow other than they are, that you want them to be different, that they aren’t good enough as is. Is this tactic likely to result in greater closeness? Not remotely. Ironically, this form of trespass is likely to yield the exact opposite of what you desire; you’ll push this person farther away from you. If this pattern of trespassing persists long enough, it may end in your partner leaving the relationship altogether!

After all, if they wanted the same intimacy you did, then they would have been right there in the middle when you got there. Or maybe, if you had waited a moment (or a few days) longer, they would have arrived at the middle, all on their own, whenever it was most comfortable and natural for them to do so.

Another strategy that people–mostly unconsciously–use to create emotional closeness takes a wildly different approach, although the results are ordinarily exactly the same.

Sometimes, when we crave intimacy that may not be currently available, we might retreat away from the middle, rather than trespassing. For instance, you might feel despondent that your partner doesn’t want to connect in an intimate way and then personalize this, making this about you rather than your partner. Perhaps you now feel worse about yourself or the relationship, then withdraw away from your partner. On a level, maybe you’re hoping this approach will encourage your partner to take action, to trespass across the middle line to retrieve you. (This approach is what children use when pouting, sulking, or collapsing on the floor in distress.) Such an approach might work in a relationship a handful of times, but it will eventually grow tiresome (for both partners) and ultimately exhaust the relationship. As a general rule, distancing just creates greater distance.

Everyone manages emotional distance between themselves and others. We place ourselves in proximity to others based upon what feels most comfortable for us personally, and the same is true for our relationship partners. Understanding this, it is pivotal to learn what genuinely promotes closeness between couples. As we’ve established, neither trespassing nor retreating works, so what does?

The only thing that genuinely achieves intimacy is respect, the respect we demonstrate through giving permission. We give permission for our partner to be who they are, to stand wherever in their half of the circle that they want to stand. We respect them and respect the middle line. We do this, not because we are powerless to compel another person to join us in the middle, but because, in almost all cases, this is the exact approach that makes another person want to come near to us. To see how this works, imagine how you would build a relationship with a stray dog. 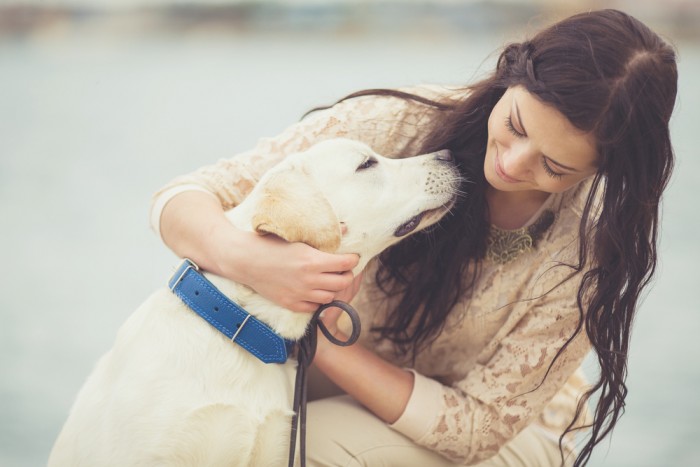 Strays usually have significant trust issues. If you run toward a stray dog you encounter (trespass), even if all you want to do is give it a pat on the head or rub its stomach, even if you’re trying to show it love and affection or maybe give it a wonderful new home, it’s going to run away from you. It’s going to manage the emotional distance between itself and you, moving quickly to the place where it feels the most comfortable and safe. If you merely walk away (retreat), it will simply go about its affairs without much ado. However, if you stand still, make eye contact with it, maybe crouch on the ground at its level and hold out a small treat, bit by bit, the stray will inch progressively nearer.

By not placing demands on it or being in a rush, you gain trust. Then, as it feels increasingly safe at lesser distances, the stray eventually arrives to you, in its own time. Then, and only then, does it let you pet its head and rub its stomach. Only then does it accept your love and affection. Why? Because you proved, through your patience and permission, that you could be trusted. Of course, maybe it runs away regardless, simply unable to trust you given the extent of its past scars and traumas (like some people). No matter what the result, you staying at “the middle line” is the only thing that gives real intimacy a chance.

To further illustrate this, I’d like to share a story about a client of mine who was wrestling with the issue of emotional distancing for quite a while.  This client was in the early stages of a relationship with someone who kept changing her mind about whether or not she wanted to be in the relationship. One week she was all in, the next all out, the next all in.

My client was perplexed about how to handle this, since he really enjoyed his time with this woman and still saw great potential in their relationship. Sometimes he wanted to put his proverbial foot down, to say, “Look, enough is enough. Make up your mind already! Either you want to be with me or you don’t. Which is it?” When she’d break things off, he wondered what to do. Should he cut ties and stop replying to her when she started seeking connection again? Or should he romance her with sweet messages aimed to convince her to return to the relationship?

The answer was obvious: neither! Adopting the principles of the middle line, I recommended that this client view himself as a shore, while seeing his on-again-off-again partner as the waves that lap up upon it, and then recede, and then return, and then recede. To “be the shore” meant giving permission, remaining constant, stable, non-judging. When she returned, I suggested he allow this (as long as this was what he wanted), understanding that she is merely moving toward him according to her nature (as a wave). When she retreated–also according to her nature–I suggested that he allow this too, thereby demonstrating himself to be a true partner to her, someone who was willing to be patient, caring, fully supportive, fully trustworthy.

During times of separation (which only lasted a matter of days), whenever she reached out to him, he’d be completely gracious and normal, communicating just as he would while they were together. He stayed open and honest about his thoughts and feelings when asked and accepted her invitations to reconnect whenever she felt ready. Over time, this woman retreated less and less often and the relationship they developed with one another grew exponentially closer and more intimate. As I write this, they are still together and both report that it is the best relationship they have ever been in. This is how standing at the middle line, being the shore, works to create true and lasting closeness. Of course, there’s more I can say on this topic, but for now I’ll leave it at this. Enjoy being the shore and see what happens. Who doesn’t relish a beautiful day at the beach? 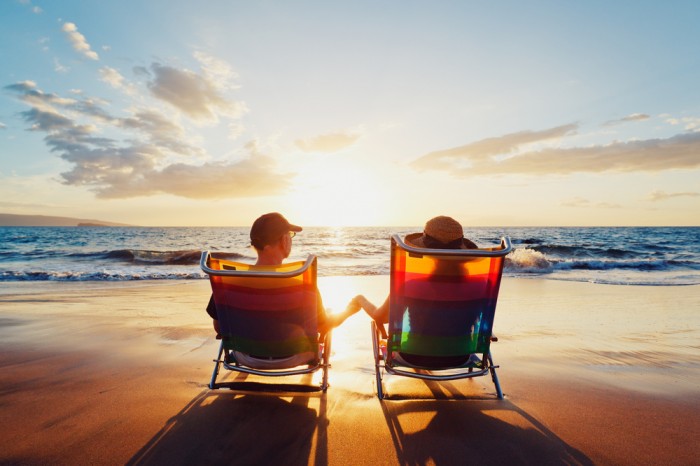